Dirt bikes are a type of motorcycle made for off-road tracks and racing. They are specifically made to run on sand, gravel, rough paths, and fundamentally rocky, muddy terrain. Riding dirt bikes is a thrilling and adrenaline-pumping activity that all bike lovers and teenagers enjoy. Now, knowing which is the correct dirt bike to purchase and how you will use this bike is very important. How fast can a 50cc dirt bike go? Is it safe to ride, how do I find one that best suits me. All of these factors need to take into consideration before you can go ahead and invest in one.

How Fast Does A 50cc Dirt Bike Go

A 50cc dirt bike has a speed range of 24-40 miles per hour. This translates to 37-63 km per hour. This is the smallest dirt bike available in the market and is good for introducing small children to it, aged between 5-8 years. Some parents a concerned that this is too fast and the kids could get into dangerous accidents. But there are some safety precautions the parents can control such as setting the throttle limit. This will allow the kids not to max out on the bike’s speed. Additionally, putting the dirt bike in second gear can also help.

Factors in play that can affect the speed of your 50cc dirt bike. include weight, transmission type, motor type, and gearing.

Should Have a Lightweight body

Dirt bikes that a heavy tend to drag and go slower than the said speed. This is because of the material used to construct the dirt bike. One example is that the dirt bike has a metal, aluminum, or steel body.

To get the best out of your dirt bike, you should opt for one made of plastic. This will allow the bike to gain and reach its maximum speed much faster. These dirt bikes are also easier for kids to handle and drive on their own.

Adjust the Engine Type to Suit Your Need

The engine is the main driving force for a dirt bike. The specifications and model for each engine can differ for each and this can determine the performance of the dirt bike. A 2-stroke engine dirt bike has more traction than a 4-stoke engine. It also allows for racing on rougher dirt paths.

Gears are what move the wheels of the bike forward. Gear ratio refers to the size of the front gears and the rear sprockets and how they connect with each other. Changing the dirt bikes’ front and rear sprockets with smaller ones will overall improve the top speed of your bike.

Check the Condition of your Bike

Regularly get your dirt bike checked by a professional. This will allow you to see if any part of your bike is damaged, or needs fixing or replacing. Keeping your bike in prime condition allows you to ride with no worries and it also ensures your personal safety since no accidents could occur due to the bike’s poor condition.

This particular dirt bike earned its nickname of the king by being a one-of-a-kind, motocross racing bike. This bike has launched the careers of many top racers such as Davis Millsap, Brock TickleZach Osborne, and many more.

This bike has a top whopping top speed of 45 mph! and is for kids ages 5-10 years. It is notably the most successful and popular motocross bike to date. They are lightweight, have responsive handling, insane engine power, and cutting-edge performance. Definitely worth the investment if you are seriously into racing.

This bike comes with a 4-stroke engine. It is however a kick-start engine only along with a smooth suspension. There is no clutch and a gear shift instead which makes it very easy to learn and ride.

This dirt bike is also a great option for new learners. It is affordable, durable, and simple to use. It has a 2-stroke engine and it comes with an auto lube oil injection system. This dirt bike is a good choice for both children and adults.

This dirt bike offers a lot of features that make it a great bike for your kids. Firstly, it has an electric start button, invested fork, front rear drum brakes, and a large driver chain that is low maintenance. This reliable engine allows for a top speed of 32 mph.

This bike comes with an automatic clutch, three-speed transmission, and an electric starting. You can adjust the power level also. The 49cc engine allows for a smooth and controlled speed pickup.

To answer your question, how fast can a 50cc dirt bike go? The answer is 24-40 mph. But keep in mind that some factors can affect the bike’s top speed; such as body structure, build material, engine power/type, the gear ratio, and the kind of fuel you are using. You should take all these factors into account before committing to buy a dirt bike. It should meet all of your needs and requirements.

Having said that, dirt bikes are a great sport for both kids and adults. Once you get the hang out of it, you can enjoy the exciting feeling that comes from racing.

How fast does a honda 50cc go?

The Cobra CX50SRX is the fastest 50cc dirt bike.

No, a 50cc suited bike is more suited for 5-8-year-olds. Older kids like 14-year-olds should have bikes between 250cc to 450cc. Take into consideration the height of the child with the bike size before purchasing. 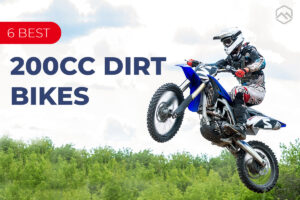 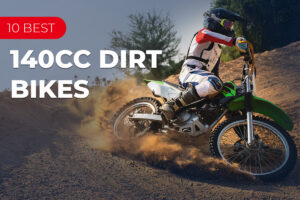